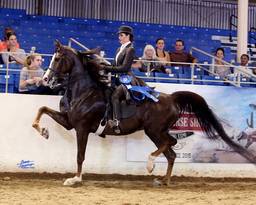 Schedule of Exciting Events at the Scottsdale Arabian Horse Show...

Al Shahania Stud, founded and owned by HH Sheikh Mohammed Bin Khalifa Al Thani, is recognized as an international racing enterprise. In the 20 years since its inception, Al Shahania has earned a place among the world's great Arabian race stables, having won races such as the Emir Sword in Qatar (8 times), the Arabian World Cup in Paris and the Kahaila Classic in Dubai. For HH Sheikh Mohammed there is a sense of national pride in Qatar's role in the ascendancy of the Arabian horse in the region, as well as deep satisfaction in the role the Arabian horse plays in his own life. http://alshahaniastud.com

Prize Money Payout -Total Prize Money Available at the Scottsdale Arabian Horse Show is Over 1 Million Dollars-   Prize Money will be paid out to 50% of the class only ; ribbons will be awarded to top ten. Prize money will be paid only to the owner named on the entry form at the conclusion of the show.  Prize money will be mailed within 30 days after the show. Prize checks not cashed within 60 days will be void.  The Social Security or Federal Tax ID number must be on file with AHAA before prize money is released. All ribbons &amp; trophies must be claimed at the awards room or they will be forfeited after the close of show.   Click here for 2020 Prize Money Scottsdale Show