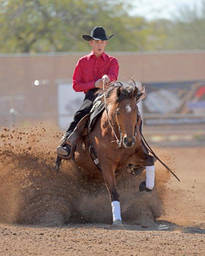 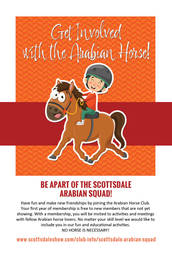 Be a part of the Scottsdale Arabian Squad! Have Fun and make new friendships by joining the Arabian Horse Club. Your first year of membership is free to new members that are not yet showing.   With a membership, you will be invited to activities and meetings with fellow Arabian horse lovers.   No matter your skill level we would like to include you in our fun and educational activities. No horse is necessary!   Click here for Membership application:   Youth_Membership_Application-Fillable_Form    Some of the fun activies our AHAA Youth Group is involved in: Youth parties &amp; games at the Scottsdale Arabian Horse Show, Arabian Breeder Finals &amp; Amercian Cup Championship Fall youth party at McDonald's ranch

Scottsdale Arabian Horse Show Greatest Show On Earth By Linda White Something irresistible was attracting out-of-towners to the Valley of the Sun long before the mountains, lakes or rivers there even had names. Like so many things, just how long before is open to debate. According to Archbishop James Ussher, prelate of Ireland, the world was created on Saturday, October 9, 4004 B.C.E. Archaeologists and geologists have since taken issue with Ussher's calculations, technology's having advanced considerably since 1654. Despite Ussher's fervent insistence to the contrary, estimates now have Homo sapiens wandering into the valley in search of big game sometime between 10,000 and 14,000 years ago. Those

The Amateur Committee of the Arabian Horse Association of Arizona is committed to the education and support of the amateur owner in the care, use and enjoyment of the Arabian horse.  We organize events to help promote the Arabian horse in the community while continuing to educate the versatility of these amazing animals.  The Amateur Committee meets on the first Wednesday of every month at AHAA office located at 15455 N. Greenway-Hayden Loop, C18 Scottsdale, AZ 85260 at 6PM.  Our door is open to all horse/non-horse enthusiast, we encourage you to come join us, bring a friend and be a part of this exciting community of horse lovers...    Some of our recent events: Scottsdale Arabian Horse Show Parada del Sol

Understanding the Different Performance Disciplines at the Scottsdale Show The Versatile Arabian   The Arabian - Throughout history this unique breed has kept its legend alive. The Arabian horse has had a strong presence throughout much of recorded history, with rulers, nomads, and prophets all proclaiming their admiration for the breed. Today, the Arabian’s beauty, confirmation and history still inspire horsemen all over the world. Description A subject of more equine are than any other breed and admired worldwide for his beauty and athleticism, the Arabian horse is so distinctive that most horsemen can easily pick him from a herd. Attributes include a dished face, large, black expressive eyes set wide 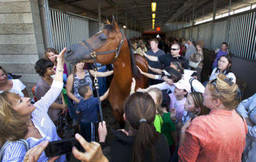 Membership Information
As a member of AHAA there are many benefits, they include but are not limited to:

Arabian Horse Association of Arizona and the Scottsdale Arabian Horse Show History  August of 1952, at the Hotel Westward Ho in downtown Phoenix, a small group of Arabian horse owners met and agreed to the importance of the formation of a likeminded group, to promote interest in the Arabian horse and named this group the Arabian Horse Association of Arizona (AHAA).  Why the downtown Phoenix hotel?  Knowing the history of this area, recall that the population was about 50,000 and air conditioning was very new, the Westward Ho was the very first hotel to install air conditioning – and August in Phoenix was usually less than bearable.  These founders were looking to the future and agreed to the education and promotion